The competition proclaimed by “Fondazione Collegio delle Università Milanesi” - an institution supported by the seven universities and major public and private institutions of Milan – sought project ideas for a new dormitory building to complete the campus together with the existing one designed by Studio Zanuso in the '70s and the one under construction designed by Milan based architect practice PIUARCH. Our project starts from the interpretation of the context and the dialog with the volumes of the other two buildings. The three-story high building we designed aligns to the three main axes of the other two buildings of the campus: north-south, southwest-northeast and est-west.

The building runs parallel to the west border of the plot and bends to create a front along via Ovada on the north side. This flipped-J shape exploits the plot surface in the best way and creates a new courtyard together with the building under construction. The volume act like a barrier toward the exterior of the plot on north and west sides while on south side it strongly relates with the garden of the campus. We decided to keep the ground level of the new dormitory on the existing level of the plot which is around 2 meters lower than via Ovada on the north side of the property. Therefore, the new courtyard is lower than the street being the natural continuation of the public park on the south side, on the east side the courtyard connects with the campus garden with a naturally shaped grass slope. On the other hand, the north side of the plot is raised to have a car access from via Ovada. All the main interior spaces of the dormitory look into the courtyard, the collective spaces are on the north east part of the building parallel to via Ovada, here you enter on first floor thanks to the level difference. The entrance/reception is directly connected to the recreational spaces, from here you gain access to the main corridor on the north-west side of the building reaching the 51 student-rooms of the complex on the three floors. On the north part of second floor and ground floor there are respectively spaces for cultural activities and service spaces, every floor has a small collective kitchen for the students. The elevations facing the courtyard are characterized by the long prismatic balconies recalling the building designed by Zanuso. The balconies serve also as passive protection from summer sun radiation. The facade on west and north side has three long strip of glass blocks which guarantee to the corridors natural light and privacy at the same time. 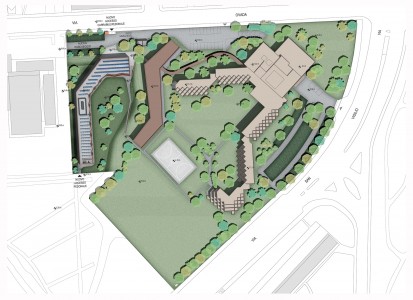 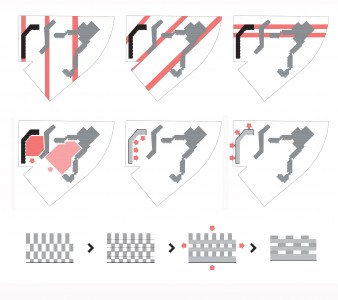 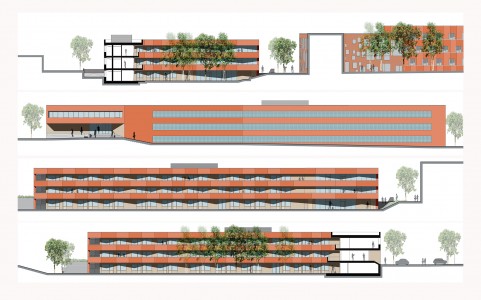