The original function of the building as a food warehouse and the modular typological characterization is in many ways similar to that of an industrial building of the late '800 early '900, starting from this assumption the proposal is based on a deliberate contrast between memory and contemporaneity. The surprise given by the insertion of an extraneous element on the existing walls is the basis of the figurative concept of the project, which is presented as a palimpsest of past and present. The interior of the “Ex Frigorifero” is emptied in order to create a flexible space that is more adaptable to the functional needs of the client, an "alien" structure is introduced on the existing one creating a tension between old and new, transparency and opacity, empty and full, memorial element and iconicity.

The interventions on the original structure are focused on maintaining the atmosphere of an industrial buildings of the beginning of the last century but in a metaphysical dimension, avoiding any vernacular romanticism in order to not overlap redundantly with the already rich environmental context of Piazza Vincenzo Virginio characterized by the Monumental Complex of San Francesco which houses the civic museum. The walls are cleaned and replastered creating a compact and homogeneous image, the inner courtyard is tidied up and paved to create a large space that serves as a foyer for the auditorium and the museum, a courtyard for the cafeteria and an exhibition space itself. The walled arches on the front inside the courtyard are reopened to create a more permeable and flexible environment on the ground floor and redesign the elevation. The new independent structure consists of reinforced concrete walls and is exposed as an element of composition of the interior spaces, the original masonry walls are relieved from any structural function. The extension containing the exhibition spaces is configured as a diaphanous volume that emerges like an "iceberg" above the existing structure reminding the former function with its reference to the image of ice. The materials proposed seek the simple and unadorned aesthetic of industrial archaeology: the galvanized iron windows and doors, the translucent u-glass coating for the extension, the rough plaster for the existing structure, the new structure in exposed concrete, the internal floors in polished concrete and the external paving in porphyry. In the exhibition space the stereotype of the neutral "white box" are avoided to create a fertile contamination between the parts that promotes "site-specific" artistic processes, on this behalf the large courtyard and the terrace on the second floor can be used for "en plein air" and large installations. 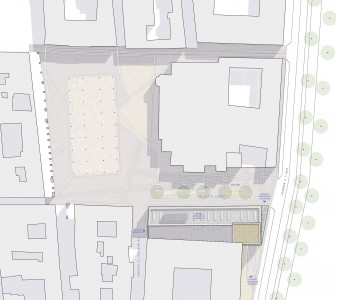 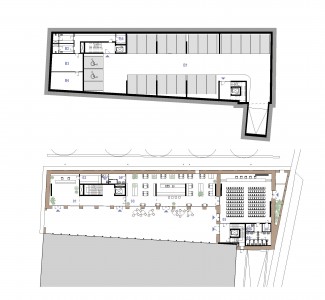 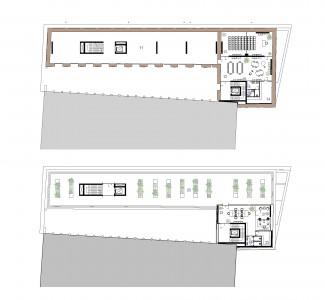 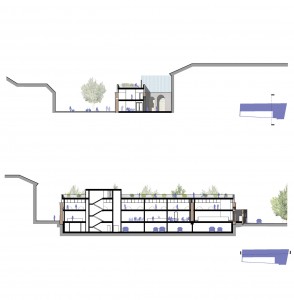