In 2015 Bozen Province announced a competition to rebuild the mountain hut “Petrarca” which was destroyed by an avalanche. Our proposal integrates the hut in the rock of the mountain. The new volume is treated as rock-sediments-like layers that become the continuation of the mountain. The north side - more exposed to avalanche danger – is attached to the mountain's rock face in order to make the snow slide above the hut's roof in case of avalanche.

The terrace to dine outside is maintained on south-west, from here you enter the mountain hut. On ground floor we have the restaurant with stube and kitchen, on first and second floor we have the dorms for the clients and the accommodations for the owner and the staff. The winter hut is on the second floor with access directly from outside, in order to be reachable even during the months when the snow level is high. 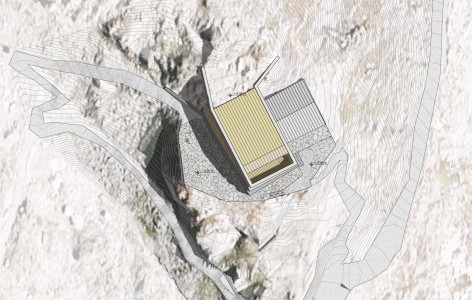