The competition area is very complex due to the irregular shape, the significant difference in altitude between the south and north sides of the lot and the interference with the existing buildings on south side. The objective of our project is to tackle these problems by proposing a solution that allows to exploit the maximum constructible volume and, at the same time, to create quality lodgings that best interpret the standards required by WOBI.

The project proposal is characterized by two fundamental elements. First of all, we chose to develop the accommodation providing two compact and regular buildings with two independent staircases. Secondly, the difference in altitude of about 3 m between the north side, along via Santa Margherita, and the south side, accessible from via Villa, is exploited to create a basement that connects the two off-ground volumes of the housing, creating a basement containing the entrances and the covered parking spaces. The organization in two separate volumes makes the impact of the building lighter and allows to exploit optimally the facades for housing, favoring south side for the living areas. The two buildings both have two flats per floor on all three floors off-ground. All apartments have a living area with loggia to the south, while to the north are the rooms. The position of the lodges varies from one floor to the other, allowing a different organization of the appartment and giving variability to the composition of the facades. We chose to give the two blocks a solid image, simple and compact: the only compositive elements are the openings of the windows and the balconies, which vary slightly from one floor to the other, giving movement and character to the design of the facades. The roof is without overhang, being in line with the "clean" shape of the volume, the slopes are oriented in a north-south direction in order to be exploited efficiently for the solar/photovoltaic panels. The façade finish is a grey "spritz" plaster with the typical white frame around the openings. The larger loggias and windows have metallic parapets; Regardless of size the windows have square proportions to give unity to the façade design. 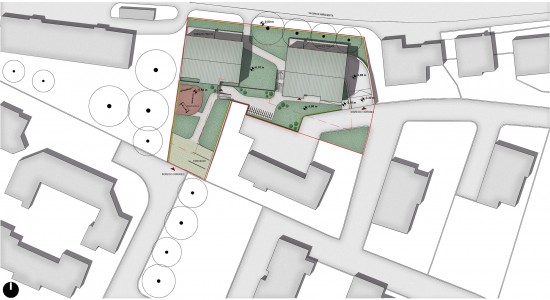