In 2014 Molise Region announced a competition for its new headquarters and a urban park, redeveloping the area of the former Romagnoli football stadium and now abandoned hotel Roxy in the center of Campobasso. The project area is now in critical condition, not only for the decayed abandoned structures but also for the exploitation of the empty spaces as parking. Our proposal wants to promote the re-connection to the existing urban texture and enhancement of the area, giving new dignity to the urban space and making it the front-yard of the city. The project has two main elements: The L shaped volume of the REGIONAL OFFICES and the new ROMAGNOLI PARK, which restores the original slope of the landscape, now excavated to house the football pitch.

Central to the project is the new system of pedestrian spaces, completely excluding cars from the surface of the area. For this reason we decided to think an underground public/private parking under the park with 300 parking lots, to make up for the suppressed parking space over ground. The project also envisions to partially make pedestrian Piazza Savoia, adding the area to the system of pedestrian spaces along Viale Regina Elena. From Piazza Savoia you descend to ROMAGNOLI PARK with a pedestrian path along the north side of the new REGIONAL OFFICES, while on south side a stair brings in to a square on the inside of the new L shaped volume of the offices. The volume of the new REGIONAL OFFICES follows the natural slope of the landscape: higher on Piazza Savoia going down to the new ROMAGNOLI PARK. The institutional main entrance of the offices is on Piazza Savoia. The glazed curtain wall is the ideal solution to guarantee a sober and elegant image together with a perfect illumination for the interior spaces. The new ROMAGNOLI PARK's crossing paths draw a texture for the landscape which is a contemporary reinterpretation of the 19th century urban garden. 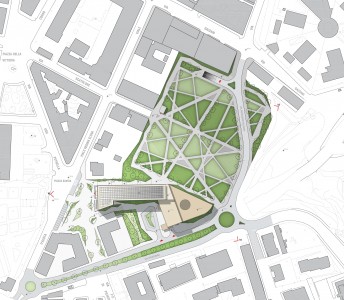 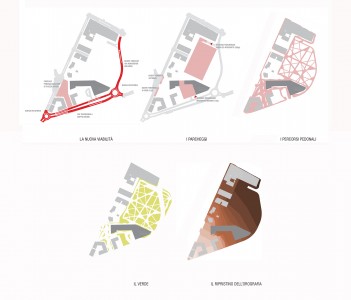