The competition area has the typical characteristics of the Padano-Veneto territory: it is on the border between a suburban residential area and the open, flat countryside opening to the west to the Euganean hills in the background. This suggestion of border, of "diaphragm" of the territory is the starting point of the project. The goal of the project proposal is a transition building between the end of the city and the beginning of the countryside, which is both visible and iconic as a building dedicated to spectacle but also integrated into the agricultural landscape with the new park: a “camera obscura” which connects the fiction of performance with the reality of territory.

The volume of the theater extends on the east-west axis: a pedestrian entrance square from Via Costituzione leads to the building that culminates in the west with an auditorium for outdoor events overlooking the countryside. The stage inside the theater can be opened towards the cavea for outdoor events. These elements "cut" the area the two creating a new hierarchy, the axis is emphasized by walls that identify the square and the cavea also acting as a border between the parking lot to the north and the public park to the south, thus avoiding interference between the two functions. The square, enclosed between the two walls, creates a perspective that culminates with the theater to the west. To the north there is a fountain with water and light effects, while to the south there are two lockable gates to access the park. The cavea is also enclosed between two walls, the specular of the square's perspective game is here the frame for the flat landscape of the countryside and hills in the distance. The park to the south remains completely immersed in the countryside and is identified as a place of escape and relaxation, well sunlit and protected from traffic noise. The proposed design recalls the agricultural vocation of the area, with orthogonal paths and regular rows of trees that divide it into partitions that recall the green fields. Two of these "camps" become equipped areas for families and for children with seats and light metal structures for protection from the sun or rain. The parking area with 200 parking spaces to the north will be used for the theater with access from via Constituzione. The base of the volumes of the theater and the partitions that enclose the square and the external cavea are clad in bricks, which recall the rural architecture and the first industrialization integrating with the natural context almost as an "archaeological" structure. The highest volumes of the stalls area and the stage are covered with translucent elements in u-glass glass that during the day give a vibrant and variable effect depending on the conditions of the sky and at night can be backlit to create scenographic lighting effects in line with the "spectacular" function of the building. 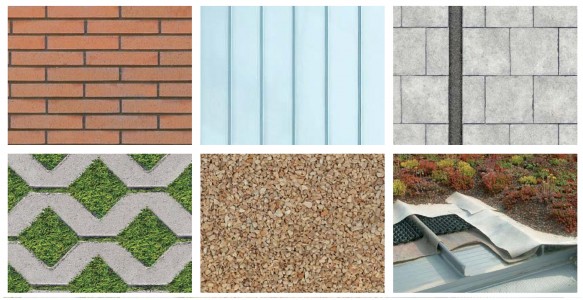