The project area is located north of the elementary school and has been used as a courtyard, currently it is in a rather disordered state, due to subsequent interventions, evidently realized in different phases: a true overview is lacking. Starting from this premise, the goal of the project is to create a unitary and interconnected school complex, solving the connection with the canteen, integrating the various functions and, however, maintaining a clear division between the technical and space used from the students. In addition, the new middle school will be a low environmental impact building with all the qualities of contemporary construction both from the architectural and technological point of view. The volume of the new school develops on the west side of the courtyard.

This choice is mainly given by three factors of practicality: to maintain the driveway access to the north east of the courtyard, not to interfere with the buried thermal power station of the primary school and exploit the difference in height and the ramp existing on the west side of the canteen in order to easily access a new technical basement room for the new middle school. Moreover, since the school will be used mainly during the morning, building on the east side of the lot would have meant shadowing the courtyard during most of the school hours, making it even less livable than it is currently. The new school develops over two floors plus a basement, the view of all the main activities is towards the multi-purpose sports area to the west. We have preferred this view because it is more free from obstructions than the one on the courtyard, which remains a mainly technical and service space. The ground floor of the new school is set on at ground floor level of the existing school. A single-storey glazed atrium connects the middle school with the elementary one, while the two-storey volume remains 10 m far from the existing façade, allowing adequate natural lighting. The main pedestrian access to the secondary school is from the west. The one-floor-high-atrium to the south of the building is the common element of connection with the existing primary school and serves as an entrance to the new middle school, as well as being used for the breaks or shared events. This space is glazed and transparent in order to give a visual connection between the different rooms of the school, a canopy protects the main entrance to the west and the exit on the court to the east. A part of the courtyard to the east is raised to the level of the ground floor, this "raised courtyard" is partially covered by a new shelter connecting to the canteen and enhanced by a portion of green that creates a visual separation from the space below. 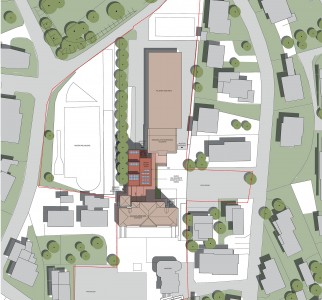 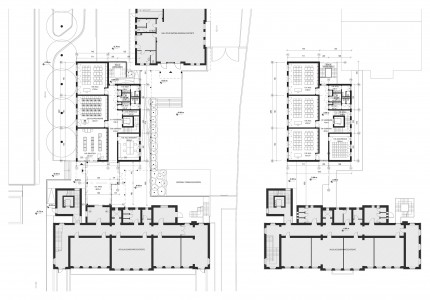 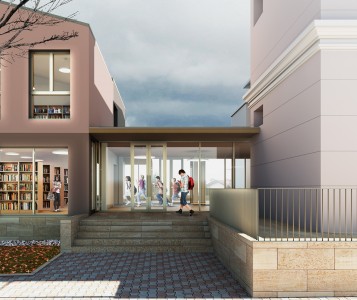 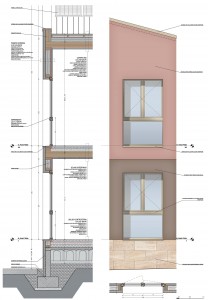